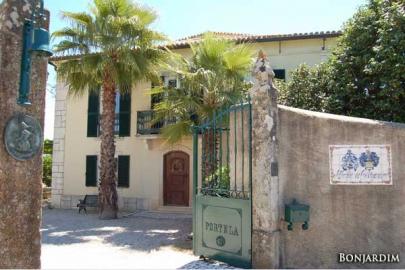 The Albergue do Bonjardim is in the village of Nesperal, which is in the geographical centre of Portugal, roughly 180 km. from Lisbon and Porto. The village with 300 chimneys is surrounded by pine trees, vineyards and hills. On the area of Albergue do Bonjardim, which covers about 28 acres, you can stroll through vineyards and the forest. You could also enjoy some wine on the terrace. Your hosts Huub and Wil will gladly tell you about the Portuguese culture and their wines. During the period that they are in the Netherlands they will be replaced by Sonia. On request you could also enjoy lunch or dinner which will be made using Sonia's passion for tradition.

Facilities: conference room, meetings room or party room (on request), souvenir shop, communal kitchen, indoor swimming pool, sauna and Turkish bath, wireless Internet, barbecue, playground, libraryand bar. There are 7 rooms furnished in the Portuguese style. Some rooms have an extra room. Each room has a bathroom. It is not allowed to smoke in any of the rooms. The bathrooms will be cleaned every day. There is a cosy but simple apartment aswell, suited for 10 people.

The Beiras form the dividing line between the green northern region and dry south region of Portugal. The Beiras, made up of three provinces, is not seen as the great tourist region of Portugal; these provinces are and have been important for trade and defence, which in the past was of great import. Throughout the whole region traces of foreign occupation can be found. Conimbriga is the most important Roman location of Portugal. The Romans were already living here in the 2nd century BC., but before this there had been a Celtic settlement. Coimbra the capital of Beira Litoral and the 3rd city of Portugal gets its name from Conimbriga. Afonso Henriques (The king of the new Portugal) moved his court to Coimbra, that is why Coimbra had been the capital city of Portugal for over a century. The battles that took place in this region have left their marks behind. There are many reinforced castles and fortresses in this area, especially along the eastern border where lots of forts are to be found, because they were seen to be vulnerable on account of the Spanish. These forts were put to the test during the war of independence against Spain in the 17th century and against Napoleon's troops, but nowadays it is wonderful to be able to walk around and see these forts. The Beiras are also known for their fine food, especially the best loved cheese from Portugal, the sucking pig and a number of local red wines. Albergue do Bonjardim is situated in the village of Nesperal, in the centre of Portugal, about an hour and half's drive from to the Atlantic Ocean and the Spanish border. The highest mountain of Portugal, the Serra da Estrela is about two hours drive away. Lisbon and Porto are a little further than two hours drive away from Albergue do Bonjardim. Coimbra takes about an hour and a quarter to drive to.

Number of persons8Prices on request

Sales of own produceBreakfast€ 7,50Lunch€ 7,50Dinner€ 25Distance to supermarket1 kmDistance to restaurants2.5 km

Facilities for playing outside

Tours of the farm

Facilities and activities in the surroundings (< 15 km)

not allowed to smoke in the rooms

Pets are not allowed

Height above sea level (in meters)350