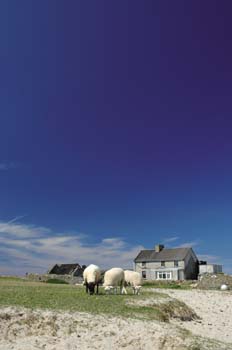 Accommodation located on an island of about 36 acres (14 ha) with a rocky foreshore and sandy beach, that is is very safe for swimming. As there is no pollution, the water is very clear. There are two smaller adjoining islands which may be reached on foot at low tide. Fishing is possible from the shores of all three islands. Illauntannig is one nautical mile from shore and may be reached by motorboat in ten to twelve minutes.

The accommodation consists of a two story farmhouse with four bedrooms, sleeping six to eight people, a living room with large fireplace, front porch, kitchen, toilet with shower (hot and cold running water). Drinking water, gas for cooking and refrigeration supplied. Oil lamps for light. Two-way radio communication with the mainland. Transport to and from the island daily, if required. Bedclothes, cooking utensils and the like supplied. Rent includes all of the above.

Illauntannig is one of a group called the Maharees Islands or Seven Hogs. Situated on the north side of the Dingle peninsula, at the entrance to Tralee Bay, it was inhabited until 1953. The island is called after St. Seamach, who founded a monastery here in the 6th century. The remains of the monastery may still be seen. They consist of a large stone cross, a small church with a stone altar, beehive huts, burial monuments and a short underground passage. Not far on Dingle you find a dive-school and a (wind)surfschool.

Facilities and activities in the surroundings (< 15 km)